In urban architecture, a stoop is a small staircase ending in a platform and leading to the entrance of an apartment building or other building.

Originally brought to the Hudson Valley of New York by settlers from the Netherlands, this word is among the Dutch vocabulary that has survived there from colonial times until the present. Stoop, "a small porch", comes from Dutch stoep;[1] (meaning: step, pronounced the same as stoop) the word is now in general use in the Northeastern United States and is probably spreading.

New York stoops may have been a simple carry-over from the Dutch practice of constructing elevated buildings.[2]

Stoops as a social device 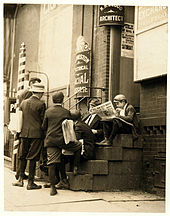 Traditionally, in North American cities, the stoop served an important function as a spot for brief, incidental social encounters. Homemakers, children, and other household members would sit on the stoop outside their home to relax, and greet neighbors passing by. Similarly, while on an errand, one would stop and converse with neighbors sitting on their stoops. Within an urban community, stoop conversations helped to disseminate gossip and reaffirm casual relationships. Similarly, it was the place that children would congregate to play stoop ball. Urbanites lacking yards often hold stoop sales instead of yard sales.

In her pivotal book The Death and Life of Great American Cities, Jane Jacobs includes the stoop as part of her model of the self-regulating urban street. By providing a constant human presence watching the street, institutions such as stoops prevent street crime, without intervention from authority figures. In addition, they motivate better street maintenance and beautification, by giving it social as well as utilitarian value.

pre:United States copyright law in the performing arts
next:Us Against Them (book)
相关推荐