The university is organized into seven separate units: the School of Arts & Humanities; School of Community & Global Health; Drucker School of Management; School of Educational Studies; the School of Social Science, Policy, & Evaluation; the Center for Information Systems & Technology; and the Institute of Mathematical Sciences.

The Claremont Colleges were designed to incorporate the Oxford Model of higher education. Instead of one large university composed of several separate schools, the Claremont Colleges are made up of different institutions designed around differing theories of pedagogy. CGU was founded upon the principle that graduate education is separate and distinct from undergraduate education. Students discover and cultivate their disciplines during undergraduate course work; at CGU students continue cultivation of their own disciplines, but are also expected to augment this with research that incorporates other disciplines as well. This is called "Transdisciplinarity" and is an essential component of Claremont Graduate University’s functioning theory of pedagogy.[3]

The school is home to more than 2,000 master's and PhD students, as well as approximately 200 full and part-time faculty members. The Carnegie Foundation for the Advancement of Teaching has classified Claremont Graduate University as a CompDoc/NMedVet: Comprehensive doctoral (no medical/veterinary) with high research activity.[4] Its seven academic units and other related programs and institutes award master's and/or doctoral degrees in 31 disciplines. Enrollment is limited and classes are small. In 2018, the university also introduced its first online master’s degree programs.[5]

The School of Arts and Humanities includes departments in the fields of Art, Arts Management, Religion, Music, English, Cultural Studies, Archival Studies, Media Studies, History, and Applied Women's Studies. These subjects have an interest in interdisciplinary studies that provide disciplinary depth as well as cross-disciplinary flexibility. 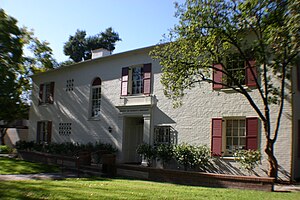 The Institute for Antiquity & Christianity, which houses the School of Arts and Humanities and the Department of Religion

In the Department of Religion, students can earn a degree with a focus in Mormon Studies, Catholicism, Islamic Studies, History of Christianity, Hebrew Bible, Indic Studies, Coptic Studies, Zoroastrianism; additional programs include Women's Studies in Religion, Religion and American Politics, Ethics and Culture, and Philosophy of Religion and Theology.

Formed in 2008, the School of Community and Global Health is dedicated to generating scientific knowledge about the causes and prevention of disease and the improvement of health and well-being of diverse populations locally and globally. The school is responsible for training professional practitioners to translate prevention science into improved practice and policy for health promotion and disease prevention at the individual, community and global levels.

The school offers a Ph.D. in Health Promotion Sciences, DrPh., M.P.H. degrees; the M.P.H. program, which has a variety of concentrations, is fully accredited by the Council on Education for Public Health. As of 2019, the school enrolls over 140 students, has a 12:1 student-faculty ratio, and boasts over 90 alumni.

CISAT was founded in 1983 by Paul Gray as an independent entity. Unconstrained by a typical business school structure, students are allowed to focus specifically on those topics associated with IS&T. The school provides a solid technical grounding in IT systems, while at the same time, addressing the significant management challenges to designing, developing, implementing and assessing IT systems in applied business and governmental settings. 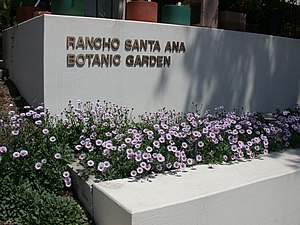 Other Programs and Institutes

Peter Drucker Institute is a think tank and action tank based at Claremont Graduate University that was established to advance the ideas and ideals of Peter F. Drucker, the father of modern management.

The Getty Leadership Institute at Claremont Graduate University is a leading source of continuing professional development for current and future leaders of museums and other nonprofit institutions.

CGU also has a number of other institutes and affiliations, including Sotheby’s Institute of Art, the Claremont Evaluation Center, the Quality of Life Research Center, and the Institute for Democratic Renewal, among several others.

As part of the Claremont Colleges, CGU sits on 550 acres (220 ha) of land and includes over 175 buildings that is home to the Claremont University Consortium in Claremont, California.

In July 2007, CNN/Money magazine ranked Claremont as one of the top 5 places to live in the United States.[7] 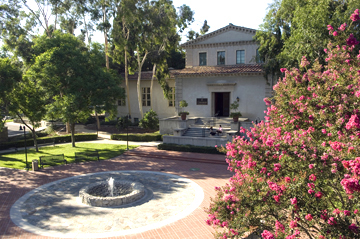 The Academic computing building The ACB is a three-story, 27,000-square-foot (2,500 m2) facility completed in 1985, which was renovated in 2009 to include the third floor. It houses academic computing resources, the School of Social Science, Policy, & Evaluation, the Center for Information Systems and Technology, two computer labs, and the Kay E-Health Center. It is also home to the Paul Gray PC Museum.[8]

Ron W. Burkle Building The Ron W. Burkle building was completed in 1998. Named after CGU fellow Ronald Burkle, it is currently home to the Peter Drucker and Masatoshi Ito Graduate School of Management. It is a three-story, 36,000-square-foot (3,300 m2) facility housing offices, classrooms and lecture halls, the Drucker Library and the Drucker Institute.[9]

The CGU Art Building The CGU Art Building is home to two galleries, The East Gallery and the Peggy Phelps Gallery. During the semester the galleries feature work by current MFA students as well as special exhibits curated by professors, featuring the work of local artists. The art building has an independent studio space for each student measuring 22 by 12 feet. Once a year, the art building and all of the studios are opened to the public in an event called "Open Studios." 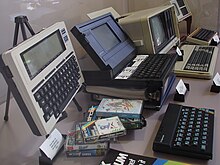 The Paul Gray PC Museum is a computer museum at Claremont Graduate University. It is named in honor of the late Paul Gray, a former professor at the university who founded CGU’s information sciences program, and is located in the Center for Information Systems and Technology. As of November 12, 2005, the museum is showing the "Best PCs Ever",[10] based on the article "The 25 Greatest PCs of All Time"[11] published by PC World.

Claremont Graduate University is home to the Kinglsey Tufts Poetry Award. The Award is presented annually for a work by an emerging poet. The $100,000 award was established in 1992 by Kate Tufts to honor her late husband, poet and writer Kingsley Tufts. It is the largest monetary prize in the nation for a mid-career poet.[12] A year later, the $10,000 Kate Tufts Discovery Award was established to recognize a poet of promise.