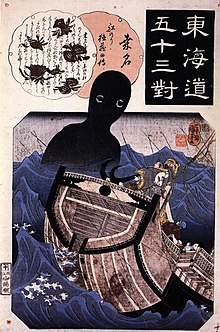 Ukiyo-e print of the sailor Tokuso encountering an umibōzu, by Utagawa Kuniyoshi 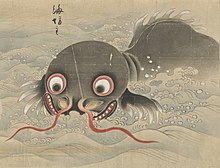 Umibōzu (海坊主, "sea bonze") is a spirit from Japanese folklore. Little is known of the origin of umibōzu but it is a sea-spirit and as such has multiple sightings throughout Japan. Normally, umibōzu appears to sailors on calm seas which quickly turn tumultuous. It either breaks the ship on emergence or demands a bucket or barrel from the sailors and proceeds to drown them. The only safe way to escape an umibōzu is to give it a bottomless barrel and sail away while it is confused.

The origin of umibōzu is unclear as there are no stories specifically referencing what caused its creation or its first appearance. One theory about the origin of umibōzu is that they are the spirits of dead priests who were thrown into the ocean by Japanese villagers[1] for some reason or another. Because their bodies have nowhere to be laid to rest, their souls inhabit the oceans and haunt it in the shape of a dark shadow, reaping its revenge upon any souls unlucky enough to come across it.

In the early Edo period scroll Bakemono no e, umibōzu is shown to have a shaved, smooth head and appears to be all black but it also looks like a mix between a dog and possibly a sea serpent and an octopus (see image). Its arms end in what resembles hand made up of five tentacle-like appendages constituting a hand. It also has a longer body with fins running down its spine as the lower body disappears underwater, once again obscuring our view of its lower body and continuing the mystery of what its lower body looks like. Similar to most legends, the eyes are opened wide and it is smiling. There are two tentacle-like appendages coming from its face which could be feelers of some sort. This is the only occurrence of these feelers and they do not appear in any other legends or accounts.

The presence or sighting of an umibōzu is widespread[2] and not an uncommon occurrence. Physically, it is often represented as a large, black humanoid figure which only ever rises from the ocean to about its waist, never revealing its lower half. According to most accounts, no one knows what the lower half of an umibōzu looks like and thus this figure is shrouded in mystery. Some posit it has tentacles like an octopus while others suggest it is purely humanoid and has two legs like the monks and Buddhas it resembles. The humanoid figure generally appears to be up to 10 meters tall, but can come in a variety of sizes. The sheer size of the yōkai helps it to drown the sailors and break the ships it comes upon in the seas. Some stories claim an umibōzu can break a ship in half with its hands or by swinging its arms. The body is jet black like that of a shadow with a shaved, smooth head like those of the monks and Buddhas of Japan. This is the only tie to Buddhism or any type of religion in most umibōzu legends which seems strange. Normally, if a yōkai looks a certain way it is to accomplish something specific to the spirit but umibōzu seems to have no ties to Buddhism in anything beyond its appearance. Some accounts suggest umibōzu appear to be praying and constantly smiling while their two, round eyes are opened wide in a constant stare. One common theme in every account is the eyes which seem to pierce the sailors and stands out in stark contrast with the black void of its skin. Some accounts suggest umibōzu has two arms like a human and others suggest they resemble tentacles like that of an octopus.

Umibōzu always appear only in the ocean, usually during peaceful waters and fair weather[3]. These fair conditions would normally put the sailors at ease as they are literally “sailing on smooth waters” but the possible presence of a malicious spirit put many sailors on edge in these times of peaceful sailing. Upon its sudden rising from the ocean, causing waves and sometimes flipping ships or breaking them[4] with its emergence, umibōzu is accompanied by the winds begin to blow and waves toss the ship about. The appearance of an umibōzu alone causes this dramatic shift in weather which puts any ship in immediate peril, not only from being capsized by the waves but also from being crushed by the yōkai. This could be a mixing of the funa yūrei[5] legends which suggests these yōkai appear during storms at sea. With very few first person sightings which are recorded or passed on, umibōzu tends to have characteristics with other yōkai. Similar to the funa yūrei, umibōzu either breaks the ship with its arms or it demands a barrel from the sailors which it consequently uses to drown the sailors by scooping up water and dumping it into the ships deck[6]. Funa yūrei use ladles to drown sailors in some Japanese legends while some accounts of umibōzu claim it appears with a ladle for the same purpose. The only way to escape from an umibōzu safely is to give it a bottomless barrel, such that it cannot scoop up water, thereby giving the sailors a chance to escape. While it is confused and attempting to scoop up the water in a futile effort, the sailors have just enough time to sail away to safety. The yōkai seems to be foolish in the way it does not understand why it cannot scoop water with the bottomless barrel, possibly showing the superiority of humans over yōkai in general. Normally, a chance encounter with umibōzu is deadly for all and as such there are very few instances of first-person accounts of an umibōzu encounter. Any survivors of such an encounter are due to their giving a bottomless barrel or if there were a shipwreck survivor adrift in the ocean who washed ashore.

Usually called the "sea monk" (umi means sea and bōzu means monk), umibōzu has no ties to religion in any of its actions or sightings. Victims of this yōkai are random and have no ties to any action or belief. Sailors who were attacked were of no specific sect or religion as they are only ever described as pitiable sailors, the victims of an attack.

1 The Unnatural (The X-Files)