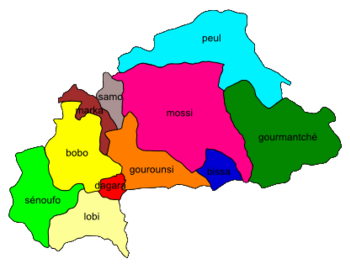 A map of major languages in Burkina Faso. 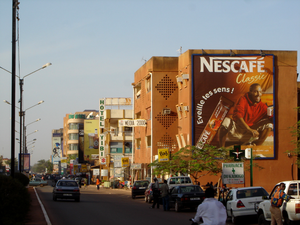 Commercial signs in French in Ouagadougou. 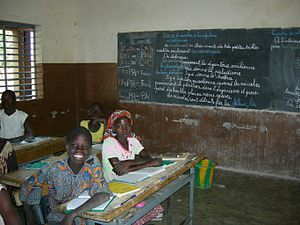 French is the principal language of instruction in Burkinabé schools.

Burkina Faso is a multilingual country. An estimated 70 languages are spoken there, of which about 66 are indigenous.[1] The Mossi language (Mossi: Mòoré) is spoken by about 40% of the population, mainly in the central region around the capital, Ouagadougou. French is the official language. English is very rarely spoken.

Education for the deaf in Burkina uses American Sign Language, which was introduced by the deaf American missionary Andrew Foster. The Burkina Sign Language is used in Ouagadougou.[3]

The official language is French, which was introduced when France colonized Burkina Faso in 1919. French is the principal language of administrative, political and judicial institutions, public services, and the press. It is the only language for laws, administration and courts. French is the language of instruction in the nation's schools.[4] However, fewer than 15 percent of the population uses French on a day-to-day basis.[5] Despite this low percentage, there is a high amount of support in keeping French as the language of instruction because it provides children a pathway to social mobility and assures continued economic support for education.[6] In fact, according to a 1998 report, “Burkinabe saw no interest in sending their children to school to learn a language that they already spoke at home”.[7]

French is one of 13 languages used on the radio.[8]

The Mossi language, also known as Móorè, is the most widely spoken language in the country, with 48 percent of Burkinabes being speakers as of 2008.[5] Dyula and Fulfulde are also recognized as national languages. This has caused consternation with speakers of the other languages, who have protested it as an injustice.[9]

The country's name was taken from words in two of the most widely spoken languages, with ‘Burkina’ meaning ‘men of integrity’ in Mossi and ‘Faso’ meaning ‘father’s house’ in Dyula.

Most of the languages that are spoken belong to either the Mande or Gur branches. In rural areas of Burkina Faso, one's native language is typically used for common activities.[2] In large towns, most people are multilingual.[8] Although not recognized as a national language, Gourmanché is spoken by 5.51% of the population. Other important minority languages include Bissa, spoken by 2.85%; Bwamu, spoken by 1.91%, Dagara, spoken by 1.76%; and Samo, spoken by 1.66%.[11] Dagara is spoken in the southwestern part of Burkina Faso and borrows heavily from French and, to a lesser degree, English.[12] 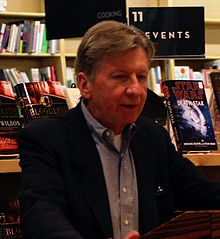 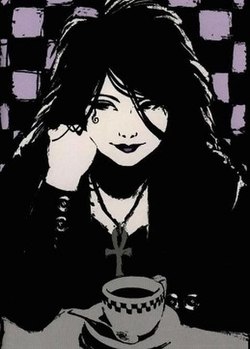 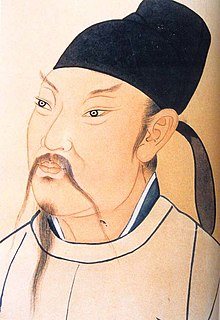