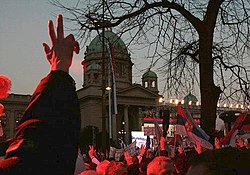 Three-finger salute at 2008 Kosovo is Serbia rally in Belgrade

The three-finger salute (Serbian: три прста/tri prsta, "three fingers"), commonly known as the Serb salute, is a salute which originally expressed the Holy Trinity, used in oath-taking, and a symbol of Serbian Orthodoxy, that today simply is an expression, a gesture, for ethnic Serbs and Serbia, made by extending the thumb, index, and middle fingers of one or both hands.

In Serbian and Orthodox tradition, the number three is exceptionally important.[2] Three fingers are used when signing the cross in Orthodoxy, symbolizing the Trinity. The Serbs, when swearing Oath, historically used the three fingers (collected, as when crossing) along with the greetings "My Holy Trinity" (Svetog mi Trojstva) or "for the Honorable Cross and Golden Freedom" (za krst časni i slobodu zlatnu) during formal and religious events.[2] The salute was often made with both hands, raised above the head.[2] Serbian peasants sealed a pledge by raising three fingers to the face, the face being "the focus of honour" in Balkan culture.[3] A Serbian proverb goes "There is no cross without three fingers" (Nema krsta bez tri prsta).[4] Karađorđe was appointed leader of the Serbian rebels after they all raised their "three fingers in the air" and thereby swore Oath.[5]

The three fingers were viewed of as a symbol of Serbdom in the 19th century. Njegoš mentioned "the crossing with three fingers has not remained" when speaking of the Islamization of Serbs, a central theme in The Mountain Wreath (1847).[6] Paja Jovanović's painting, The Takovo Uprising (1888), depicts Miloš Obrenović holding a war flag and saluting with three fingers.[2] The Serb-Catholic movement in Dubrovnik, which supported that Serbs had three faiths (Orthodoxy, Catholicism and Islam), criticized the Pan-Serbists who according to them only "truly believed those Serbs, who cross with three fingers".[7] A short story published in 1901 surrounds a Serbian despot meeting with a Szilágyi, who has the despot's three fingers cut off by Franciscan friars after discussing the right way of crossing.[8]

Serbian Metropolitan Nikolaj Velimirović (1881–1956) called for a Serbian salute in which three fingers were to be raised along the greeting: "Thus Help Us God!".[9] In 1937, Velimirović began a sermon protesting the Catholic support for separation of state and religion in Yugoslavia with "Rise three fingers Orthodox Serbs!".[10]

Vuk Drašković, the leader of the Serbian Renewal Movement political party, said in a 2007 interview that he first used it in 1990 at the founding meeting of the party, inspired by Paja Jovanović's painting.[14] During the March 1991 street demonstrations in Belgrade, the three fingers were massively used by Drašković's supporters, representing the three demands that the Serbian Renewal Movement had put before the government.[15][16]

During the Yugoslav wars, the salute was widely used as a Serb symbol. In the prelude of the Bosnian War, Bosnian Serbs were encouraged to vote in the 1991 referendum through posters which displayed the three fingers.[17] During the wars, Serb soldiers raised the three fingers as a sign of victory.[18][19]

According to political scientist Anamaria Dutceac Segeste, the significance of the salute is diverse: although it has been used by nationalists, it cannot be monopolized as such; it has been used without aggressive nationalist connotations, i.e. at sport events, by opponents of Milošević, by President Boris Tadić during the 2008 Summer Olympics, etc.[1]

The salute is often used by sport fans and players when celebrating victories. After winning the 1995 European basketball championship, the entire then-Yugoslav team displayed the three fingers. Sasha Djordjevic says he flashed the three fingers "not to be provocative. Just: that's Serbia, that's us, that's me – nothing else. It's my pride."[20] Serbian tennis player Novak Djokovic raises three fingers after his victories.[21]

The salute is used by members and supporters of almost all Serbian political parties on their rallies during election campaigns. It can be seen at all kinds of street demonstrations and celebrations.

Croats, Bosniaks, and Kosovo Albanians, who have been at war with Serbs, find the salute provocative.[22] A 1998 Politika news article spoke of the "perennial demonization" of the salute, "which had already entered the catalogue of planitarian gestures", together with the closed fist, outstretched palm and V sign.[23]

When Russian peacekeeping troops entered Sarajevo in 1994, they used the salute when greeting the Serb troops,[24] and because of this, they were branded pro-Serb; the UNPROFOR used the Serb salute when greeting the Serbs, and the V sign when greeting the Bosniaks, showing impartiality.[25] There were instances when non-Serb captives were forced to use the salute.[26] During the Croatian War, there were instances of massacred Serb civilians having had their three fingers on the right hand cut off.[27][28] A Croatian Serb woman interviewed by war correspondent Misha Glenny had had her three fingers shot off.[29]

In a famous photograph of the Red Star Belgrade team celebrating their victory at the 1990–91 European Cup, eight players are seen using the Serb salute, while a Croatian player, Robert Prosinečki, is not.[32]

In 2001, Australian football team Perth Glory's Bobby Despotovski (of Serbian parentage) was sanctioned by the Australian Soccer Federation for giving the salute to the predominantly Croatian-community crowd at a Melbourne Knights home game and inciting a fight; Despotovski and coach Bernd Stange were subsequently assaulted by Knights fans, forcing the next fixture between the sides to be moved to Launceston.[33]

2007 Eurovision winner Marija Šerifović used the salute when celebrating points; controversially, she used the salute when receiving the maximum of 12 points from Bosnian viewers, after which Bosnian media reported it as being used as a direct provocation.[34][35] The Swedish-Serbian National Association called it 'ridiculous', saying that the salute is not to be mistaken in that way, but viewed of as nothing more than 'a modified V sign'.[36]

Serbian water polo player Aleksandar Šapić said in 2007 that "I know that it was used by soldiers in war, but I do not raise three fingers because I hate someone. I respect all peoples, and know what is in my heart."[37]

The salute was met with controversy in Turkey after Duško Tošić, playing for Beşiktaş, used the salute after Serbia won over Albania in the guest match in the UEFA 2016 qualifiers; Beşiktaş fans threatened him through Turkish media.[38]

There has been instances in former Yugoslavia where supporters paradoxically borrow symbols and slogans from the other ethnic groups: in May 2003, Bosnian Croat club Široki Brijeg fans, during a match against Bosniak FK Željezničar Sarajevo, chanted "kill the Turk" and raised the three-finger salute.[22]

Rade Leskovac, president of a Serb minority party in Croatia, caused controversy in 2007 when election posters featuring him with the salute were posted around Vukovar.[39] In 2015, an art-piece mural on a school wall in Umag, Croatia, depicting a hand counting was removed due to likeness to the Serbian salute.[40] Foreigners are warned not to use the salute in Croatia.[41][42]