The Bacchae (/ˈbækiː/; Greek: Βάκχαι, Bakchai; also known as The Bacchantes /ˈbækənts, bəˈkænts, -ˈkɑːnts/) is an ancient Greek tragedy, written by the Athenian playwright Euripides during his final years in Macedonia, at the court of Archelaus I of Macedon. It premiered posthumously at the Theatre of Dionysus in 405 BC as part of a tetralogy that also included Iphigeneia at Aulis and Alcmaeon in Corinth, and which Euripides' son or nephew is assumed to have directed.[1] It won first prize in the City Dionysia festival competition.

The tragedy is based on the Greek myth of King Pentheus of Thebes and his mother Agave, and their punishment by the god Dionysus (who is Pentheus's cousin). The god Dionysus appears at the beginning of the play and proclaims that he has arrived in Thebes to avenge the slander, which has been repeated by his aunts, that he is not the son of Zeus. In response, he intends to introduce Dionysian rites into the city, and he intends to demonstrate to the king, Pentheus, and to Thebes that he was indeed born a god.[2] At the end of the play, Pentheus is torn apart by the women of Thebes and his mother Agave bears his head on a pike to her father Cadmus.[3][4]

The Bacchae is considered to be not only one of Euripides's greatest tragedies, but also one of the greatest ever written, modern or ancient.[5] The Bacchae is distinctive in that the chorus is integrated into the plot and the god is not a distant presence, but a character in the play, indeed, the protagonist.[6]

The Bacchae has been the subject of widely varying interpretations regarding what the play as a whole means, or even indeed whether there is a “moral” to the story.

The extraordinary beauty and passion of the poetic choral descriptions indicate that the author certainly knew what attracted those who followed Dionysus. And the vivid gruesomeness of the punishment of Pentheus suggests that he could also understand those who were troubled by the religion.[7]

At one time the interpretation that prevailed was that the play was an expression of Euripides’ religious devotion, as though after a life of being critical of the Greek gods and their followers, the author finally repented of his cynicism, and wrote a play that honors Dionysus and that carries a dire warning to anyone who doesn’t believe.[2]

Then, at the end of the 19th century the opposite idea began to take hold; it was thought that Euripides was doing with The Bacchae what he had always done, pointing out the inadequacy of the Greek gods and religions.[8]

The Dionysus in Euripides' tale is a young god, angry that his mortal family, the royal house of Cadmus, has denied him a place of honor as a deity. His mortal mother, Semele, was a mistress of Zeus who while pregnant, was killed by Hera, who was jealous of her husband's affair. When Semele died, her sisters said it was Zeus' will and accused her of lying; they also accused their father, Cadmus, of using Zeus as a coverup. Most of Semele's family refuse to believe Dionysus is the son of Zeus, and the young god is spurned in his home. He has traveled throughout Asia and other foreign lands, gathering a cult of female worshipers (Maenads or Bacchantes). At the play's start he has returned, disguised as a stranger, to take revenge on the house of Cadmus. He has also driven the women of Thebes, including his aunts, into an ecstatic frenzy, sending them dancing and hunting on Mount Cithaeron, much to the horror of their families. Complicating matters, his cousin, the young king Pentheus, has declared a ban on the worship of Dionysus throughout Thebes.[9]

The play begins before the palace at Thebes, with Dionysus telling the story of his birth and his reasons for visiting the city. Dionysus explains he is the son of a mortal woman, Semele, and a god, Zeus. Some in Thebes, he notes, don’t believe this story. In fact, Semele’s sisters—Autonoe, Agave, and Ino—claim it is a lie intended to cover up the fact that Semele became pregnant by some mortal. Dionysus reveals that he has driven the women of the city mad, including his three aunts, and has led them into the mountains to observe his ritual festivities. He has disguised himself as a mortal for the time being, but he plans to vindicate his mother by appearing before all of Thebes as a god, the son of Zeus, and establishing his permanent cult of followers.[4]

Dionysus exits to the mountains, and the chorus (composed of the titular Bacchae) enters. They perform a choral ode in praise of Dionysus. Then Tiresias, the blind and elderly seer, appears. He calls for Cadmus, the founder and former king of Thebes. The two old men start out to join the revelry in the mountains when Cadmus’ petulant young grandson Pentheus, the current king, enters. Disgusted to find the two old men in festival dress, he scolds them and orders his soldiers to arrest anyone engaging in Dionysian worship, including the mysterious "foreigner" who has introduced this worship. Pentheus intends to have him stoned to death.[10]

The guards soon return with Dionysus himself in tow. Pentheus questions him, both skeptical of and fascinated by the Dionysian rites. Dionysus's answers are cryptic. Infuriated, Pentheus has Dionysus taken away and chained to an angry bull in the palace stable. But the god now shows his power. He breaks free and razes the palace with an earthquake and fire. Dionysus and Pentheus are once again at odds when a herdsman arrives from the top of Mount Cithaeron, where he had been herding his grazing cattle. He reports that he found women on the mountain behaving strangely: wandering the forest, suckling animals, twining snakes in their hair, and performing miraculous feats. The herdsmen and the shepherds made a plan to capture one particular celebrant, Pentheus' mother. But when they jumped out of hiding to grab her, the Bacchae became frenzied and pursued the men. The men escaped, but their cattle were not so fortunate, as the women fell upon the animals, ripping them to shreds with their bare hands. The women carried on, plundering two villages that were further down the mountain, stealing bronze, iron and even babies. When villagers attempted to fight back, the women drove them off using only their ceremonial staffs of fennel. They then returned to the mountain top and washed up, as snakes licked them clean.[11]

Dionysus, still in disguise, persuades Pentheus to forgo his plan to defeat and massacre the women with an armed force. He says it would be better first to spy on them, while disguised as a female Maenad to avoid detection.[12] Dressing Pentheus in this fashion, giving him a thyrsus and fawn skins, Dionysus leads him out of the house. At this point, Pentheus seems already crazed by the god's power, as he thinks he sees two suns in the sky, and believes he now has the strength to rip up mountains with his bare hands. He has also begun to see through Dionysus' mortal disguise, perceiving horns coming out of the god's head. They exit to Cithaeron.

A messenger arrives to report that once the party reached Mount Cithaeron, Pentheus wanted to climb an evergreen tree to get a better view and the stranger used divine power to bend down the tall tree and place the king in its highest branches. Then Dionysus, revealing himself, called out to his followers and pointed out the man in the tree. This drove the Maenads wild. Led by Agave, his mother, they forced the trapped Pentheus down from the tree top, ripped off his limbs and his head, and tore his body into pieces.

After the messenger has relayed this news, Agave arrives, carrying her son's bloodied head. In her god-maddened state, she believes it is the head of a mountain lion. She proudly displays it to her father, Cadmus, and is confused when he does not delight in her trophy, but is horrified by it. Agave then calls out for Pentheus to come marvel at her feat, and nail the head above her door so she can show it to all of Thebes. But now the madness begins to wane, and Cadmus forces her to recognize that she has destroyed her own son. As the play ends, the corpse of Pentheus is reassembled as well as is possible, the royal family devastated and destroyed. Agave and her sisters are sent into exile, and Dionysus decrees that Cadmus and his wife Harmonia will be turned into snakes and leads a barbarian horde to plunder the cities of Hellas.[13] 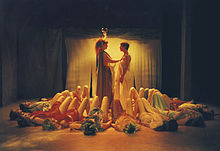 Dionysus: "It's a wise man's part to practise a smooth-tempered self-control."
Dionysus: "Your [Pentheus'] name points to calamity. It fits you well." (The name "Pentheus" derives from πένθος, pénthos, grief)
Messenger: "Dionysus' powers are manifold; he gave to men the vine to cure their sorrows."
Dionysus: "Can you, a mortal, measure your strength against a god?"

The ancient Greek concept of religion was very different from the concept as it is generally known today. The Greek gods did not demand worship. Instead they merely demanded to be recognized and accepted as a part of the human experience.[32] The scene of Dionysus being brought before King Pentheus to be interrogated regarding his claim of divinity has been compared to Jesus’s interrogation by Pontius Pilate.[33] However, that particular comparison is limited; Dionysus before his interrogator is not a meek sacrifice about to be crucified; rather, the shoe is on the other foot and Dionysus will soon be sending the king to die by being torn apart by his own mother.[8]

In the play's climactic plot construction, Dionysus the protagonist instigates the unfolding action by simultaneously emulating the play's author, costume designer, choreographer and artistic director.[34] Helene P. Foley, writing of the importance of Dionysus as the central character and his effect on the play's structure, observes: "The poet uses the ritual crisis to explore simultaneously god, man, society, and his own tragic art. In this protodrama Dionysus, the god of the theatre, stage-directs the play."[35]

At the play's start, Dionysus' exposition highlights the play's central conflict: the invasion of Greece by an Asian religion.[36]

Until the late 19th century, the play's themes were considered too gruesome to be studied and appreciated. It was Nietzsche's "Birth of Tragedy" in 1872 that re-posed the question of Dionysus's relation with the theatre and awakened interest in The Bacchae. In the 20th century, performances became quite fashionable—particularly in opera, due in part to the dramatic choruses found throughout the story.[37] In 1948, R.P. Winnington-Ingram said of Euripides' handling of the play: "On its poetical and dramatic beauties, he writes with charm and insight; on more complex themes, he shows equal mastery."[38] Recent criticism has been provided by P.E. Easterling, et al. in The Cambridge Companion to Greek Tragedy.

The Bacchae had an enormous impact on Roman literature. It seems to have been one of Horace's favorite tragedies.[39] The play's influence, however, has extended far beyond the Romans; dramatists and filmmakers of all ages have been greatly impacted by it. The tragedy's influence can be seen in the writings of Henrik Ibsen,[40] as well as Thomas Mann's 1912 novella Death in Venice[41] and Oliver Stone's 2004 film Alexander.[42] 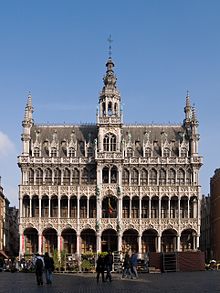 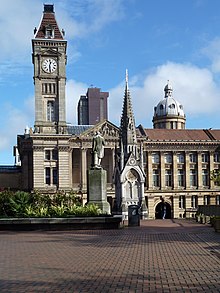 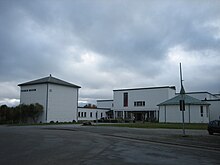 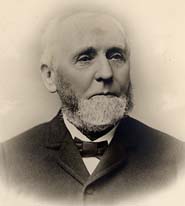 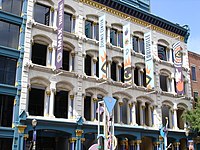 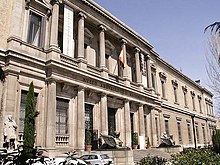 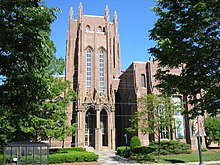 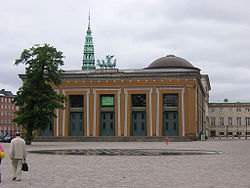