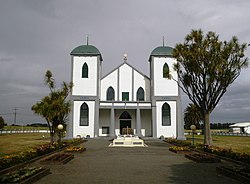 The Rātana movement (Māori: Te Haahi Rātana) is a church and pan-iwi political movement founded by Tahupōtiki Wiremu Rātana in early 20th-century New Zealand. The Rātana Church has its headquarters at the settlement of Rātana pā near Whanganui.

In 2001 the total number of New Zealand residents that were affiliated with the Rātana church was 48.975.[1]

The main symbol (tohu) of the church is the five-pointed star and crescent moon, the whetū mārama (which means both "star and moon" and "shining star"), worn on the lapels of mōrehu (the scattered remnant, Rātana followers) and at pivotal points on church buildings. The golden or blue crescent moon (symbolising enlightenment) can face different parts of the coloured star: blue represents Te Matua (The Father), white is Te Tama (The Son), red is Te Wairua Tapu (The Holy Spirit), purple is Ngā Anahera Pono (The Faithful Angels) and gold/yellow is Te Māngai (The Mouthpiece (of Jehovah), Ture Wairua), although sometimes this colour is sometimes substituted for the colour pink, representing PiriWiriTua (The Campaigner (of Political Matters), Ture Tangata). Te Whetū Mārama represents the kingdom of light or Māramatanga, standing firm against the forces of darkness (mākutu).[2]

On 8 November 1918 Rātana saw a vision, which he regarded as divinely inspired, asking him to preach the gospel to the Māori people, to destroy the power of the tohunga, and to cure the spirits and bodies of his people. [3]

Until 1924 he preached to increasingly large numbers of Māori and established a name for himself as the "Māori Miracle Man". At first, the movement was seen as a Christian revival, but it soon moved away from mainstream churches. On 31 May 1925, Te Haahi Rātana (The Rātana Church) was established as a separate church which was registered on 21 July 1925[4] , and its founder was acknowledged as the bearer of Te Mangai or God's Word and Wisdom.

Hostile attitudes have caused the church to be guarded towards its teaching and founder.

The Rātana Church is made up of the Ture Wairua (spiritual laws) and the Ture Tangata (physical laws). The spiritual laws are itemised as the Father, the Son, the Holy Spirit (in Maori, Te Matua, Te Tama me Te Wairua Tapu), and Ngā Anahera Pono (the Holy and Faithful Angels) and also adding Te Māngai (God's Word and Wisdom) to prayers. Its central book is the Bible, although the Blue Book, written in Māori and containing prayers and hymns (many composed by Rātana), is used in all church services.[5]

In order that these things should become manifest, a price was paid by the sons of Tahupotiki Wiremu Rātana: Te Arepa, Te Omeka, PiriWiriTua, and Hamuera. Rātana said he would divide his body into four parts: in the West was Te Arepa, in the South was Te Omeka, in the North was PiriWiriTua, and in the East was Hamuera. These names represented the four seats that Maori were allowed to vote for. Eruera Tirikatene won Southern Maori as a Ratana candidate in a 1932 by election. Toko Ratana won Western Maori as a Ratana candidate in 1935 election. Paraire Karaka Paikea and Tiaki Omana as Ratana endorsed Labour candidates won Northern Maori in 1938 and Eastern Maori in 1943 respectively. 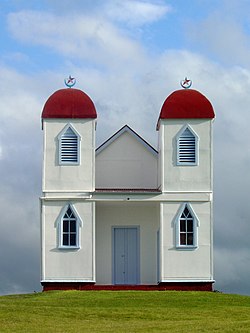 Te Mangai is spirit, and His kaupapa was the spiritual laws, which were supported and endorsed by his chosen people—the Morehu. The Morehu determined that they should support and endorse Rātana. The right was given by Ihoa (Jehovah). PiriWiriTua carried the kaupapa, which was to address the sicknesses of the land, the Rātana movement. He needed Maori to be united for the Treaty to become entrenched into law. From the treaty comes the laws of man: two people but one land.

In 1924 a group including Rātana journeyed to Europe to unsuccessfully present a petition to George V and the League of Nations on land confiscations and the Treaty of Waitangi. Later trips were made to the U.S. and Canada. These trips were not without controversy. The New Zealand Government acted to prevent the petition being presented to the monarch, and the visit to Japan on the way back from Europe created allegations of disloyalty and of flying the Japanese flag over the church settlement of Rātana Pā.

When the Rātana temple (Te Temepara Tapu o Ihoa (The Holy Temple of Jehovah)) which Ratana saw as embodying in its architecture deep Biblical truths (especially the two magnificent bell towers) was opened on 25 January 1928 by Japanese Bishop Juji Nakada (with whom Ratana and party had stayed in 1924), Rātana declared his spiritual work was complete and church apostles and officers would take on the work.[6] He now turned more to political work for Maori in New Zealand. Calling himself Piri Wiri Tua (the campaigner), he called the four seats in Parliament reserved for Māori the koata (quarters) of his body. This term is from the Maori language and is applied to each of the four New Zealand Maori seats and to the Rātana movement Members of Parliament (MP) who held them.

As early as 1923, Rātana had declared an interest in party politics, and his eldest son Haami Tokouru Rātana had stood for the Western Maori electorate as an independent candidate. Now Rātana was determined to capture the Māori electorates to give a voice for his movement.

In January 1928, Rātana called himself Piri Wiri Tua and called on four followers to be the quarters of his body and rule the land. The "first cut" was Paraire Karaka Paikea in the north, Haami Tokouru Rātana in the west, Pita Moko in the east, and Eruera Tirikatene in the south. Pita Moko being replaced later by Tiaki Omana in the "second cut". The covenant signed by the men promised they would not rest, and their wives separately agreed that they would go barefoot and in rags to represent the Rātana movement. All four went on to capture the Maori seats between 1932 and 1943.

Rātana candidates stood in the 1928 and 1931 General Election and in the 1930 by-election in Western Maori following the death of Maui Pomare, but they did not succeed. The first Rātana movement MP was Eruera Tirikatene, elected in a by-election for Southern Maori in June 1932. He was followed by Haami Tokouru Rātana (known as Toko) in Western Maori in the 1935 general election. In the 1938 election, the third Māori electorate of Northern Maori was captured by Paraire Karaka Paikea, and the last (Eastern Maori) was won by Tiaki Omana in the 1943 election.

The Rātana Independent Members of Parliament were the first to represent a political party in which most party members were Māori. Major aims of the movement were statutory recognition of the Treaty of Waitangi, righting the confiscation grievances of the Māori people, and equality in social welfare for Māori.

Alliance with the Labour Party

Following the 1935 General Election of the First Labour Government, the two Rātana MPs agreed to vote with Labour. This alliance was formalised with the Rātana movement joining the Labour Party in a meeting between Rātana and Prime Minister Michael Savage on 22 April 1936. The Prime Minister was given four symbolic gifts: a potato, a broken gold watch, a pounamu hei-tiki, and a huia feather. The potato represented loss of Māori land and means of sustenance, the broken watch represented the broken promises of the Treaty of Waitangi, and the pounamu represented the mana of the Māori people. If Savage could restore these three, he would earn the right to wear the huia feather to signify his chiefly status. The gifts were regarded as so precious they were buried with Savage at his state funeral in 1940.

Rātana movement Members of Parliament have included Tapihana Paraire Paikea, Haami Tokouru Rātana, Matiu Rātana, Iriaka Rātana, Koro Wētere, Paraone Reweti, Matiu Rata, and Whetu Tirikatene-Sullivan. Mita Ririnui, who was a List MP as of 2006 and who held the Māori seat of Waiariki from 1999 to 2005, is a Rātana minister.

In both the parliaments of 1946–1948 and of 1957–1960, the formation of a Labour Government depended on the votes of the Rātana Movement members. Not all Labour Party Māori MPs have been members of the Rātana Church, but the alliance with Rātana allowed Labour to hold on to all four Māori electorates from the 1940s until 1996.

Politicians usually attend the Ratana marae to take part in celebrations marking T.W. Ratana's birthday. During the prime-ministership of John Key, this continued, with the notable exception being in 2015, when he was overseas and unable to attend. This invited some controversy, although Deputy Prime Minister Bill English attended in his place.[7]